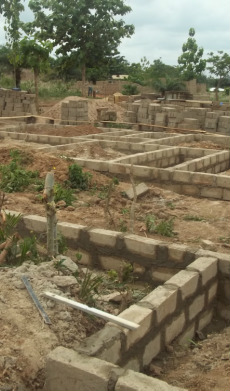 UPDATE: We have just completed the perimeter wall around the children's compound!

The first House of Hope was established in Liberia, Africa in 2004 and later followed by HOH Kabale, Uganda, in 2008.

HOH Sunyani, Ghana, in West Africa is our most recent project. The children that fill these rooms are well known to us because for several years, we have rented facilities and cared for them. Victor Donker contacted Houses of Hope via the internet in 2008. Moved by his words our executive team traveled to Ghana, West Africa, in may of 2010 to meet Victor, his wife, and the children that were in his care. Immediately their hearts were captivated by the beautiful children. They discovered that the Donkers were taking care of over 30 kids who had no parents and no homes. Despite what these young ones had faced, they found love in the arms of Pastor Victor and his wife. Moved by their story, our executive team began suporting this home that was soon declared "House of Hope Sunyani".

In this House of Hope the children experience a nurturing family environment, safety, and education. Victor is a local pastor as well as a committed house parent. He and his wife currently care for over 35 HOH children. They have a full understanding that they can make a difference and change the next generation and in doing so, bring effective change to Ghana.